Seven crews arrived in Mid Wales for the 3rd round of the Championship, the Rallynuts Severn Valley Stages. This was a new event for the series but the popular stages were in good condition and the crews were looking forward to a high speed event. The sun was shining and air and ground temp was high so the wet stages after the recent rain were drying nicely.
As Championship leaders Zak Hughes & Tom Wood led the field away from the events Builth Wells base. They struggled through the first few stages with an intercom issue and also reported tricky conditions in the opening stage only managing 3rd fastest in the ST's.
James Giddings & Sion Cunniff were next on the road and with no problems settled immediately into a good pace topping the stage times after the first pass of Crychan.
Kalvin Green & Osian Owen were also on the pace from the word go and set a respectable time on the opener, only 4 seconds behind the leader Giddings although Hughes was only 3 seconds behind them.
Fourth away of the Championship registered ST's was Martin Laverty & Phil Kenny. Martin and Phil were hoping for better luck than on round 1 after gearbox and power steering issues but sadly lady luck passed them by again and they suffered a front wheel puncture in the long opening stage so were forced to stop and change to avoid damaging the car. This dropped the crew to the bottom of the ST time sheets.
Fifth on the road and holding a comfortable 4th place in the standings after Stage 1 was father and son team Matt & Tim Tordoff. They had moved up to an M-Sport car this season after several outings in the Club spec ST last year. Unfortunately they had retired early on in Round 1 so this event was the beginning of their learning curve and the plan was to get those all important miles under their belt.
Neil Fewless & Stephen Varey were next on the road and were making their rallying return after a lay off, Neil having previously competed in bigger cars such as Mitsubishi's, Toyota's, Cosworth's and Mk2 Escorts. The crew chose the ST Trophy for their return as a cost effective championship, however Fewles had never driven FWD or LHD so SS1 was an definite eye opener and their inexperience of the car and pacenotes showed in their stage times.
Wesley Gilford & Ryan Griffiths rounded off the field in their Club spec ST. This was Wesley's first ever rally in his new car, the ex John Goff machine. They took it steady through the first few stages getting used to this new experience, Gilford only ever having done Stock car Racing 20 years ago. Luckily co-driver Ryan was not new to the sport so he was able to help Wesley with his experience and they headed to service in 6th place.

Zak managed to up the pace, even without an intercom and with Tom giving him hand signals instead of pacenotes they moved into the lead with a very slender 3 second over a still pushing Giddings. Green was 15 seconds behind in 3rd place with Tordoff settling in nicely 47 seconds further back. Fewlass & Varey were in 5th ahead of Gilford & Griffiths with Laverty & Kenny rounding off the crews in 7th after their time consuming puncture.

The crews left service and headed out to the very popular Radnor stage followed by a second service. The positions were the same as they headed back out after service for a further loop of 3 stages.

Drama hit Zak & Tom on the second run through Crychan, hitting a log pile which holed the radiator and damaged the gear linkage. They continued to the end of the stage but were forced to retire on the road section to SS6 due to the damage. This left Giddings & Cunniff with a comfortable lead and they kept their nose clean and made it back to the Builth Wells showground as round 2 winners. Green & Owen came home in 2nd place just under a minute behind the leaders with The Tordoffs  a minute and a half behind to round off the podium positions in 3rd. Neil & Stephen came home a respectable 4th after their long lay off from rallying with Martin Laverty having to push all afternoon after his morning puncture woes to overhaul Wesley & Griffiths for 5th. Gilford coming home in 6th in the club spec car and was very happy with his first experience of rallying.

Keep up to date with the championship via the facebook page. 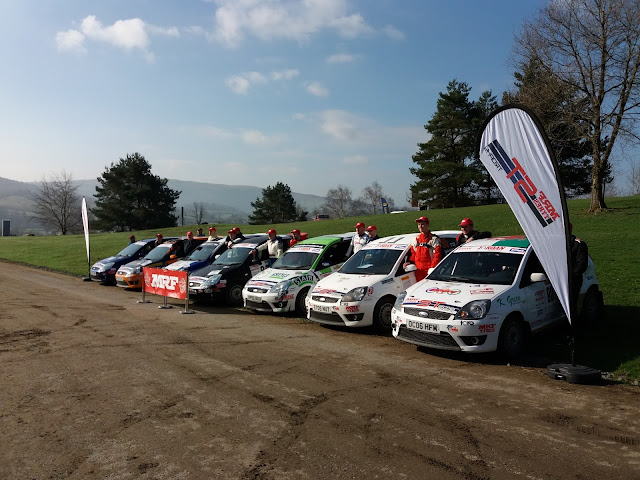