The 2019 MRF ST Trophy got underway at the Cambrian Rally based in North Wales. 7 of the 11 registered crews made their way to a surprisingly sunny Llandudno. The event was also round 1 of the BRC so the organisers had put on a spectacle which included town centre servicing for the crews.

Bobby Mitchell & Shannon Turnbull led the crews away and immediately struggled with brake issues in the first couple of stages. Not knowing if it was the car or the conditions causing the issues. Their plan coming into the event had been to push hard from the word go, but with the brake issues they opted for a more conservative approach but still arrived at the Llandudno town centre service with a 7 second lead.
Zak Hughes & Tom Wood returned to the ST Trophy for a second season. Last year they were always setting the pace but a catalogue of mechanical woes put them out of any championship contention. With a fully refreshed car they headed out to the stages in a confident mood but like Bobby they suffered brake issues in the slippery opening stages. After Zak realised he had been turning the bias valve the wrong way he managed to settle into a nice rhythm and topped the time sheets on a couple of stages and were looking forward to a battle with Mitchell & Turnbull in the afternoon.

David Kelly & Kenny Bustard had made the long trek over from Ireland, arriving just in time to get the car passed through scrutiny. This was to be David's first time on the gravel, only ever doing asphalt events over on the emerald isle. The first couple of stages were taken with caution but they soon settled into a good pace and reported no issues at service and in a comfortable 5th place.

Rhydian Price was another returnee to the championship, he had the world famous Steven 'Doc' Brown in the passenger seat, the pair had teamed up last year in the Welsh championship to good effect. Sadly their first event back wasn't going to bare the fruit they had wished for, a spin on stage 1 with a costly three point turn followed by a snapped shaft on stage 3 which sidelined the likeable duo.
Matt Baddeley had Phil Kenny on the notes, Phil is a regular co-driver in the ST championship so Matt was in good hand. The plan for the event was to get miles under their belt and get used to the new car. With no issues at service they were happy with their progress and they were in 6th place.

Will Corey & Brynmor Pierce set a good pace from the word go, Will actually driving Brynmor's car so a little pressure on to make sure the car stayed in one piece. Will was settling in nicely to the car and was at the sharp end of the leader board through the morning loop coming into service in 3rd place.

Elliott Stafford & Lewis Sim, another new pair to the championship were on a learning curve, getting to know the car and the stages. They were struggling with overheating issues at first service, the mechanics stripping the front of the car trying to solve the issue. They were laying in 4th place at this point.

6 cars set pout from service to tackle the remaining 4 stages. Bobby still led after stage 4 but Hughes had been pushing hard and Mitchell's lead was now less than a second. Corry was still in 3rd and was happy with his pace, Stafford had started to have gearbox issues and the car was still struggling with the overheating issue and had begun to cut out so he was overhauled by Kelly.
Stage 5 was a disaster for the leading crew of Mitchell & Turnbull. They started the stage on a rapidly deflating rear tyre. Having been told on the start line that they had to change it in the stage the crew took a tactical decision to run the 4 miles on the flat hoping to lose less time than stopping to change. They then suffered a 2nd rear puncture and had to limp through in a very sideways style.
Zak & Tom had seen Bobby set off with the soft tyre and they knew the Scottish crew would struggle so suddenly the pressure was off. They knew just a clean run through the final stages would give them victory.
Will & Brynmor had closed the gap to 2nd place with Bobby's puncture problems and were only 6 seconds behind going into the last stage, Mitchell now out of tyres was going to have to play it cool to keep the 2nd place.
Stage 6 would be the last we would see of Stafford & Sim, the car causing too many issues to continue. Kelly now in 4th & Baddeley in 5th were having trouble free runs just getting used to their new cars, Kelly, with no lamp pod was a little nervous of the diminishing light going into the final stage but all was good.

The crews make their way to the Lake District next for the Malcolm Wilson Rally on 9th March. To keep up to date with everything ST Trophy find us on Facebook, Twitter & Instagram. 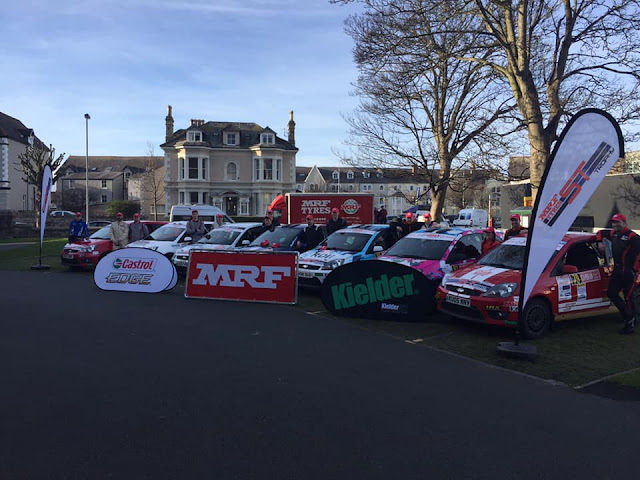