The second round of the ST Trophy was the Malcolm Wilson Rally based in the forests around Cumbria. The Rally HQ and start were based at M-Sport, the home of the Ford WRC team. 7 crews had ventured to the most northerly round of the championship and the weekend kicked off with a tour of the M-Sport workshops for registered ST Trophy crews.
Drama started early for one crew at the Cockermouth town centre scrutiny area. The master cylinder on Mathew Baddeley & Phil Kenny's car started leaking fluid into the car from the clutch pedal. The team tried to sort the problem, Mat & Phil even rushing to a local motor factors to find a replacement part but after further inspection decided to throw in the towel and have a day spectating instead.

The weather was going to play an interesting part in the event, heavy rain on the Friday would make the going tough and with overnight temperatures dropping there was a fear of ice. Saturday dawned to snow on the high ground but the temperature was rising so the ice fear was quashed but slushy conditions were going to make the early stages very slippery.

Zak Hughes & Tom Wood were the highest seeded ST crew. As championship leaders they had a target on their backs, and they were going to have to push hard to keep that yellow 'leader' sun strip. The crew went out strong in stage 1 but sadly an overshoot lost them around 10 seconds. Stage 2 was so slippery, and with over a dozen cars retiring in that stage, Hughes decided to be sensible and just get round the 5 miles and keep their nose clean. Stage 3 in Greystoke had better conditions and Hughes pushed hard and topped the time sheets but were in 2nd place heading into the first service, just 3 seconds behind the leaders.

Bobby Mitchell & Shannon Turbull were keen to show 'what could have been' on the opening round in Wales, punctures scuppering any hopes of challenging Hughes for the win there.
Mitchell meant business here in Cumbria and came out of the opening 2.6 mile test with a 4 second lead. Unfortunately they were held up in stage 2 by a slower car ahead, the crew not seeing Mitchell & Turbull, so they were forced to follow at a reduced pace for quite a distance. They were then 3 seconds slower than the charging Hughes on stage 3 but still came into service as the leading ST crew.

Third crew away were the Irish crew of David Kelly & Gerry Hughes. David had been doing some testing to gain experience of gravel and the car, this being only Kelly's second forest event, however David is no slouch in his native Ireland on the tarmac so only time will tell until he is up to speed on the gravel.
They were quick out of the blocks and were only hampered on stage 1 went they caught a slower car but on the short stage this didn't cause too many problems and they matched Zak & Tom's time. A clean run through the treacherous stage 2 with a joint fastest time with Mitchell saw them 2nd overall heading to stage 3, Greystoke. With Mitchell & Hughes battling hard now, Kelly dropped some time over the 6.5 mile M-Sport test track, maybe the lack of gravel experience the cause, but lying in 3rd place at service was something to be very pleased with.

Elliott Stafford & Lewis Sim wanted to make up for their troubled first round so headed into the first group of stages with high hopes, however, a rear puncture on stage 2 slowed them slightly & trouble with the car starting caused them a few worries. They kept going and a clean run through Greystoke stopping the clock just 1 second behind Kelly saw them go into service in 4th place just over a minute down on the leaders.

Steven Ormond-Smith had made the trip over from the Isle Of Man, this was his first showing in the championship, unfortunately missing the first round due to work commitments. Like Kelly, he was more used to tarmac so the early slushy conditions were going to be a big eye opener for the Manx man. With Max Freeman calling the notes they kept their noses clean through the first 3 stages and came into service in 5th place with no problems to report.

Wesley Gilford returned to the ST Trophy again this year, he is again the only registered competitor using the RF2.0 clubman version of the car. Wesley was joined by Mark Townson for this event and the crew had an early start with the RF cars running at the front of the field and in reverse order, Gilford & Townson actually being the 3rd car on the road so the conditions of the first 2 stages being extremely tricky. The crew made it to service but would retire on the road section out to stage 4 with an under powered engine & an electrical gremlin.

Four more stages greeted the crews before a second service back at Penrith. The first 2 short stages were identical and the crews looped round to repeat it which caused inevitable holds ups. Hughes dug deep and pushed hard through stage 4 beating Mitchell by 12 seconds and taking the lead. Stafford had a good run and was only 1 second behind Mitchell, Bobby confessing he had been caught napping after the long delay. Kelly started to suffer with a misfire and the car finally crying enough after the stage with an upset coil pack. Ormond-Smith was continuing to gain experience and kept heading in the right direction, now up to 4th with Stafford being promoted to 3rd with the demise of Kelly.
After stage 5 the crews headed to the longest stage of the day, the 12 mile Grizedale. With Hughes & Wood holding a 17 second lead over Mitchell & Turnbull they had a little bit of breathing space. Hughes again topped the time sheets but only 1 second quicker than Mitchell who had now woken up! Mitchell admitting he was going to have to settle for 2nd again if Hughes kept up his current speed. Sadly the fight wouldn't continue as Bobby found a leaking fuel rail at service 2 so was forced to retire. Steven Ormond-Smith was given a notional time and was shown as 3rd quickest through the stage with Stafford having a nightmare with punctures which then caused him to retire on the road section back to service.
Only two crews tackled the final stage back at Greystoke. Zak Hughes & Steven Ormond-Smith. They then headed the short distance back to the finish ramp at Penrith. Hughes & Wood overjoyed with their 2nd win of the season and impressively they had also come home 2nd overall in the BTRDA silverstar category for 2WD cars. Ormond-Smith & Freeman ware pleased to bag valuable points for the championship and gain experience on the gravel.

The next round is the Rallynuts stages in April. Keep up to date with all ST Trophy info on our facebook page and on twitter & instagram. 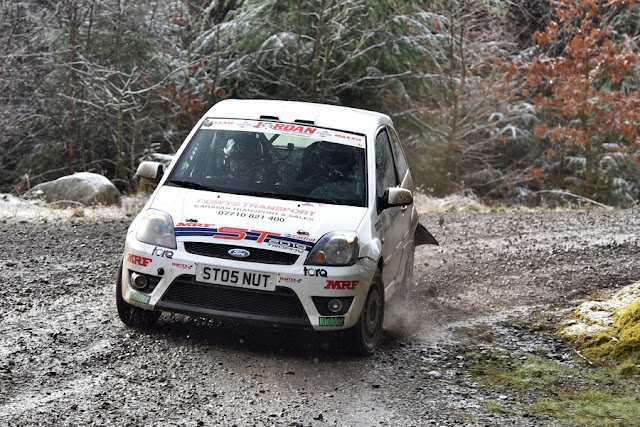 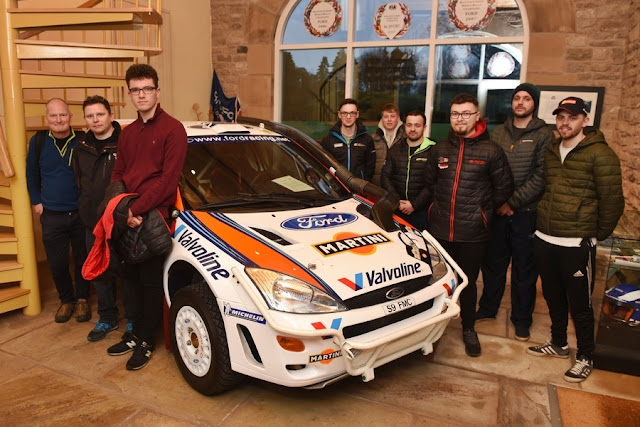 ST Trophy crews during their visit to M-Sport