Back to back wins for Bilham in DMack ST Trophy 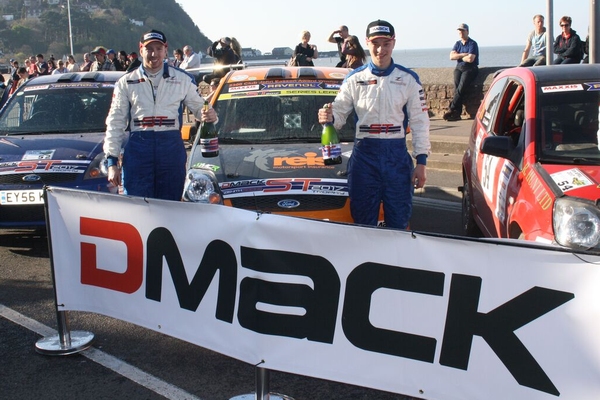 Sam Bilham made it two wins in two events as he finished first of the DMack ST Trophy crews on the Somerset Stages. Seven crews, looking resplendent in their new Zenith Racing championship overalls which were supplied by Vital Equipment.

It was Richard Wells and Calvin Houldsworth who set the pace early as they set two fastest times in the first three stages to hold a six second lead over Bilham and co-driver Cameron Fair, Wells benefiting from a test session held after he was frustrated to be down on speed at the Malcolm Wilson rally.

It all went wrong for Wells on stage four when he lost the brakes and then the car was stuck in gear, resulting in retirement. Bilham was promoted into the lead which he maintained to the end of the event.

“I’ve competed on the event twice before which gave me some very useful experience,” said Bilham. “Other than tapping a bale we had no issues and it’s great to get a second victory.”

Alasdair Currie and Steven Brown had their long journey from the Isle of Mull rewarded with a second place finish. They had been joint leader going into first service but Currie’s lack of experience of tarmac stages saw him lose 20 seconds to Bilham on the two Porlock stage. He set three fastest times on the gravel stages to finish a strong second.

In third place were Jon Ambler and Doug Chivers who were pleased to be quicker than they were on last year’s event despite using very old tyres.

Mathew Davies and Mark Crisp were fourth of the Fiesta crews and they were setting good times all day with only one issue all day, a loose wheel on one stage. The crew were pleased to have a reliable run and to gain experience.

After their dramatic accident on the Malcolm Wilson rally Tom Easson and Abi Haycock were happy to get some points on the leaderboard with a fifth place finish in their repaired Fiesta.

Elspeth Rodgers and Jordan Murphy finished sixth on their first DMack ST Trophy event and Rodgers’ first gravel rally. Rodgers gained a lot of experience and started to find a good rhythm with the car which should stand her in good stead for the rest of the season

Martin Auskerin and Jon Ross did not finish after an accident on stage one. Fortunately both crew members were ok.

Next up for the DMack ST Trophy crews is the Plains rally on 13th May which promises to be an exciting event as the new crews get used to their cars and the competition gets tougher. 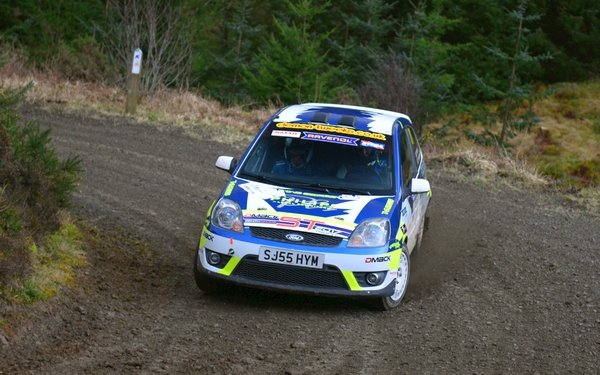 Crews in the DMack ST Trophy will journey to Minehead next weekend to take part in round two of the popular championship for Ford Fiesta STs, the Somerset Stages.

The opening round took place in Cumbria last month at the Malcolm Wilson Rally with Sam Bilham and Cameron Fair finishing in first place. Bilham and Fair at the top-seeded Fiesta ST crew on the Somerset Stages and they’re aiming to build on their great start to the season.

“It was pretty amazing to win the Malcolm Wilson Rally, especially as it was the first time Cameron and I had sat together,” said Bilham. “We will be more settled for the Somerset Stages but the other crews in the championship are only going to get quicker so we need to progress too.”

Richard Wells and Calvin Houldsworth are the next ST crew away. They initially set the pace on the Malcolm Wilson Rally but power steering issues dropped them to third place at the finish.

The third ST crew is Tobermory’s Alasdair Currie and Steven Brown who were second in the opening round. “It’s a very long trip from Mull to Minehead,” commented Currie “We got a great result in Cumbria though and I’m hoping we can fight for victory in Somerset.”

Jon Ambler and Doug Chivers won the award for best improvement on seeding on the Malcolm Wilson Rally after showing good pace all day and the crew are hoping to be battling for a podium position at round two.

Looking for a better run than they had at round one are Tom Easson and Abi Haycock. Their car has undergone major repairs after a frightening accident in Grizedale forest last time out and they’re looking for a good haul of points to get their championship campaign back on track.

After a successful Rally North Wales where Jon Ross drove and Martin Auskerin navigated the crew will be swapping seats for Somerset as Auskerin drives in his second ST Trophy event. “I struggled to find rhythm on the Malcolm Wilson Rally,” said Auskerin. “Hopefully I can get back into the groove next weekend after our good result in Wales.”

The penultimate ST Trophy crew is Matthew Davies and Mark Crisp. With the initial opening round cancelled due to snow it will be their first event of the season and they’re looking to build on the experience gained last year and to push hard for a good result.

Another crew doing their first ST event of the season is Elspeth Rodgers and Jordan Murphy. It will also be Rodgers’ first event on gravel which she is feeling excited, but nervous, about.

The rally is based in Minehead but most of the action takes places in the surrounding forests. In a change from the usual all-forest routes the rally also features two runs of the tarmac Porlock toll road which will test the crews. The event starts on Saturday morning with the successful crews finishing back in Minehead in the early afternoon.

For all the latest news please visit www.facebook.com/fiestasttrophy or www.sttrophy.co.uk.
Posted by GS at 13:20