Hughes holds on to take victory in Llandudno

7 ST Trophy crews headed to the seaside town of Llandudno for the opening round of the 2018 BTRDA championship & ST Trophy.
Richard Wells & Calvin Houldsworth lead the field away hoping to improve on their bad fortunes of 2017. They initially set the pace but newcomer Zak Hughes & Tom Wood, who had stepped up from the Suzuki Swift for 2018, settled into the Fiesta ST and started to match the pace of Wells. Also pushing hard were another new crew Kalvin Green & Osian Owen who had settled into 3rd place with a slender gap down to 4th over James Giddings & Sion Cunniff. Giddings had lost his front bumper in the opening stage and it still remains a mystery as to how!
Returning contenders Matt & Tim Tordoff sadly had an off in stage 1 which didn't cause too much damage but unfortunately took them OTL and into retirement.
Another 2017 crew who had returned for a second year in 2018 were Martin Laverty & Phil Kenny. Sadly the popular Irish driver suffered a puncture and then lost 2nd gear followed by power steering issues so decided to call it a day and retired at service not wanting to cause further damage to the car. Brynmor Pierce & Alan Jones, another new crew to the championship using the ex Guy Butler 'sheep machine' were another crew to  retire in stage 1 when they lost a wheel in a particularly rough section!
The remaining crews made their way to the service halt at the North Wales Surf Centre near Betws-y-coed.
The afternoon stages didn't prove any easier for the ST Trophy crews. Wells & Houldsworth retired form the lead with a broken driveshaft which left Hughes & Wood with a comfortable lead.
James Giddings and Sion Cunniff found some new pace and managed to overhaul Green & Owen to take 2nd place and held that position the remaining stages.
There was drama in the final stage when Zak Hughes snapped a driveshaft. The crew managed to limp the car out of the stage and effected repairs on the road section back to Llandudno. Luckily for them the time buffer to Giddings & Cunniff in 2nd was enough and they took the opening round victory.

The 2nd round of the Championship, The Malcolm Wilson Rally, has been postponed due to the adverse weather so the next round will be the Rally Nuts stages on 14th April. 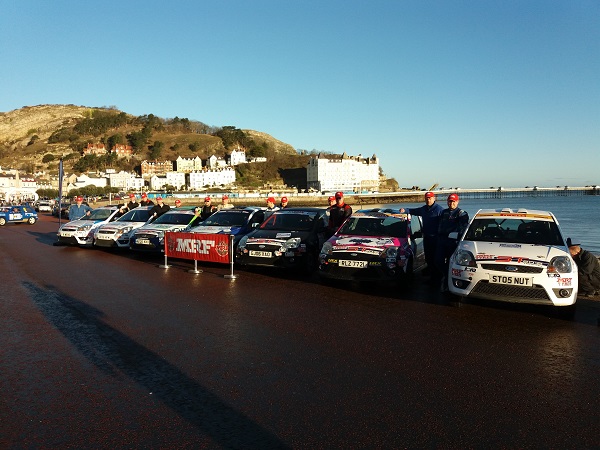